James Lloyd Brush, 88, formerly from the Kellogg area (Moon Gulch) but was currently living in West Richland WA, passed away at his home on July 23, 2020, surrounded by family.

On July 6, 1958, he married Colleen French in Lamberton, MN. They recently celebrated their 62nd anniversary. They had three children, Steven, Lori, and Daniel.

Before living in the Tri-Cities, Jim and Colleen resided in Minnesota, North Dakota, and Colorado before settling in Kellogg, Idaho, where they raised their family.

Before his retirement in 1994, Jim most recently worked in health physics at the Hanford Nuclear Site.

He enjoyed spending time with his friends and family. He could be found at Spudnuts every Tuesday and Friday catching up with friends. Jim enjoyed attending his grandchildren’s many events. He was looking forward to doing the same with his great-grandchildren. His family and friends will greatly miss him.

A private family memorial service will be held. 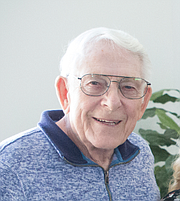