Photo by AriAna McDonald/ Hailey Cheney closes out on a Bonners Ferry shooter during the opening round of the 3A District 1 Tournament.


Photo by Josh McDonald/ Wallace’s Will Farkas (11) attempts to block Graden Nearing’s jumper during the first half of Kellogg’s win over Wallace last week.

KELLOGG — Tiger senior Jacob James had 24 of his game-high 26 points in the first three quarters to give his team a five-point lead, but a 23-7 run in the fourth quarter gave the Wildcats the edge in the battle for first place in the Intermountain League on Feb. 11 at Andrews Gymnasium.

“Jacob was a stud tonight and everything he threw up went in,” Kellogg coach Jeff Nearing said. “He had a heck of a ballgame and looked awesome tonight. We trailed most of the game, but just kept after it.”

Kellogg freshman Kolby Luna hit a 3-pointer to cut the deficit to one point. On its next possession, senior Graden Nearing gave the Wildcats a lead with a pair of free throws and freshman Riply Luna hit a jumper to give Kellogg a 52-48 lead.

“Riply really got us going,” Jeff Nearing said. “It was senior night, and we might have been a little unfocused for three quarters. When we buckled down and started flying around on defense, we just had a big third quarter.”

COEUR d’ALENE — Sophomore Jolissa Holt, the team’s leading scorer, tallied 11 of her 16 points in the first quarter as the top-seeded Knights overcame an early deficit, then rolled past the fourth-seeded Tigers in the semifinals of the 1A Division II District 1 tournament on Feb. 11 at North Idaho College’s Rolly Williams Court.

“She has really contributed as a freshman,” Lakeside coach Chris Dohrman said. “It’s been a nice surprise.”

Talowa Fallingwater had eight rebounds for the Tigers.

SPIRIT LAKE — Junior guard Taryn Soumas, who was named MVP of the Intermountain League following the title game, hit three 3-pointers and scored a game-high 23 points for Timberlake in its Feb. 12 win over Kellogg.

“Our defense, we did great on talking, and being there for each other,” Jessen said. “Our defense is what really helped us tonight.”

After Kellogg’s Darian Hill hit a 3-pointer early in the second quarter, the Wildcats were still in the game, down 16-9.

But Kellogg didn’t score for nearly seven minutes, as Timberlake ran off a 13-0 run, with Soumas and Jessen feeding each other for baskets, and Soumas drilling a 3 during that stretch.

Senior Jaron Figueroa, who led Kellogg with 15 points, banked in a 3 in the waning seconds, but Timberlake took 29-12 lead into the locker room.

“I was really happy with our defense through the majority of the game,” Miller said. “We struggled a little bit on the defensive rebounding side, but getting out to their shooters, and controlling the paint, I thought we did a really good job. It’s hard to do both.”

“We struggled shooting,” Kellogg coach Jana Nearing said. “They come out and pressure the ball really well. They’re just really quick on defense; they’ve got fast closeouts, and they can drop back quick on the dribble-drive. We knew it was going to be difficult; we tried to spread everybody out, and tried to get some looks inside. The first half was slow, trying to figure it out; it takes a little bit to adjust to the speed.”

KELLOGG — The third-seeded Badgers earned a trip to a state play-in game with victory over the second-seeded Wildcats in the loser-out second-place game of the 3A District 1 tournament on Feb. 13 at Andrews Gymnasium.

The Lady Wildcats were simply out of gas and it showed in a big way.

Multiple players were battling health-related issues and despite owning a 2-1 advantage in the season series, Kellogg just couldn’t find the energy to get the stops needed to get past the Badgers.

As the season progressed, as many teams were peaking, Kellogg could not get their health in order, battling respiratory issues, multiple concussions, and just about anything else you could imagine.

“Of course we’re disappointed,” Kellogg assistant Cody Kraack said following the loss. “We know that we weren’t able to put our effort forward tonight. We gave what we had, but it wasn’t just wasn’t enough. This is a good lesson for our younger players and now we’re just thankful that everyone can get healthy.”

Kellogg finished 13-9, including a rough 2-6 record during their last eight games.

COEUR d’ALENE — Ethan Taylor scored 24 points for the Timberwolves freshman in a win over the Tigers on Feb. 12 at Lake City High.

WALLACE — Hayden Hogamier scored 14 points to lead the Miners past the Wampus Cats in a North Star League game on Feb. 11 at Kirby Krulitz Court.

WALLACE — Graden Nearing had 12 points and three steals for the Wildcats in a nonleague win over the Miners on Feb. 14 at Kirby Krulitz Court.

“Our defensive effort after the first quarter was really good,” said Kellogg coach Jeff Nearing, whose team went 0-for-8 from the 3-point line, but finished 21-of-23 from the foul line. “I really liked our defensive effort, but we didn’t shoot the ball well tonight and overcame some poor shooting.”

COEUR d’ALENE — Sophomore Jaden House scored 14 points for the Miners, who had their season come to an end with a loss to the Bulldogs in a 1A Division I District 1-2 play-in game on Feb. 13 at North Idaho College’s Rolly Williams Court.

“I’m very proud of my girls,” Wallace coach Nichole Farkas said. “They played the entire game with a fighting spirit against the toughest matchup we have all season.”

Stovern went 2-2 at the tournament, but her losses came to opponents from much larger 5A schools.

“Taylor completed a successful freshman season, finishing 21-6 for the year and earning a spot on the podium which is outstanding,” Kellogg coach Scott Miller said. “She had a very good weight class and had an opportunity to win all of her matches in a very wide open bracket. She has set a very good standard for future girls coming into our program.”

Taylor Stovern’s results by round:

COEUR d’ALENE — The Wildcats were able to get some of their younger grapplers some extra matches prior to the upcoming district tournament.

Several Kellogg wrestlers ended the tournament on the podium, including Raymond Healy (106 pounds), Kayden Zimmerman (145) and Robbie Bublitz (285) who all finished in second place.

“I felt we got some really good things out of this tournament,” Kellogg coach Scott Miller said. “It gave us some good matches to help prepare for Districts and gave us some areas that we need to clean up before next week. I thought all of our kids wrestled hard and found ways to win matches late. I'm proud of our three finalists and thought all three did really good things to get into the finals.”

Photo by Josh McDonald/ Wallace’s Will Farkas (11) attempts to block Graden Nearing’s jumper during the first half of Kellogg’s win over Wallace last week. 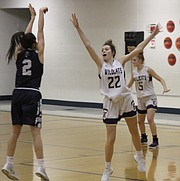 Photo by AriAna McDonald/ Hailey Cheney closes out on a Bonners Ferry shooter during the opening round of the 3A District 1 Tournament.