Gary Allen Corbeill, lifelong Silver Valley resident, passed away after a brief but strong battle with cancer on Tuesday, Oct. 6, 2020, at his home near Cataldo, Idaho. He was 81.

The family will receive friends from noon to 5 p.m. Sunday, Oct. 11, 2020, at the farm on Tamarack Ridge. Funeral services will be held at 2 p.m. Monday, Oct. 12, 2020, at Mountain View Congregational Church in Kellogg, Idaho. Vault interment will follow at Greenwood Cemetery, Kellogg.

Gary was born June 20, 1939, at Wardner Hospital in Kellogg, the only child of Gordon Bush and Alice Della Downey Corbeill. He grew up on the Sunnyside in Kellogg and was an entrepreneurial boy from a very early age. Gary was a member of the first graduating class of the new Kellogg High School in 1957. He enlisted in the U.S. Army and studied finance in Indianapolis, Ind. Boot Camp was in Fort Ord, Calif., and he completed his three-year tour as a finance clerk at the Fort Richardson Army Base in Anchorage, Alaska. He was honorably discharged in 1965.

He skied at the famous Alyeska Resort while in the military in Alaska and a highlight of his life was returning to that resort last February at the age of 80 with his family and skiing the mountain together one more time. In 1964, Gary was hired to work the ski patrol at the Big Mountain in Whitefish, Mont. Springtime found him working in the Bob Marshall Wilderness and winters were back on the Big Mountain. He met Charlotte J. Mutzenberger on Big Mountain and they married in Kalispell, Mont., on Sept. 17, 1966.

Gary and “Cricket” lived in Seattle for a few years where Gary worked downtown for General Tire and enjoyed spending time at the zoo or the Ballard Locks with daughter Shannon. They moved back to the Silver Valley in 1967 and settled in a small home in Pinehurst, Idaho, where a son, Craig, and another daughter, Nikki, were born. He was the first hill manager for the Jackass Ski Bowl (now Silver Mountain) when it opened in 1968 and following long days on the mountain he would come down to town and work in the Red Barn Ski Shop tuning up skis at night.

Gary worked in the circulation department at the Kellogg Evening News and later in advertising design and sales for several years. He became General Manager of the paper in 1983 and was named Publisher in 1985. He knew every facet of the newspaper business from sales, circulation, delivery and printing, to photography and editorials. Following the sale of the newspaper in 1987, he opened “Crow’s Printing” in Wallace — a job printing business. Gary and Cricket worked in Wallace until selling that business and he never really retired holding jobs on Silver Mountain, for Office Depot, for Dave Smith Motors or helping Cricket in her retail mercantile business “Bitterroot Mercantile” in Kellogg for several years.

He bowled on mixed leagues and men’s league for many years and participated in many bowling tournaments with friends. His love for skiing never quit and up until the age of 80, he carried a season pass and made as many runs as he could. He was a 57-year member of the Kellogg Elk’s. He loved spending time outdoors, camping, bon-fires, boating on Lake Coeur d’Alene or many, many weekends fixing fence up Bear Creek where they pastured their horses for many years.

Gary was active his entire life and probably most content doing farm chores on their little slice of heaven along Tamarack Ridge. Their horses became “big dogs” and his menagerie of cats, birds and stray dogs kept their lives full and happy.

He was extremely proud of all of his family and loved spending as much time with the grandchildren and great-grandchildren as he could. Gary and Cricket recently celebrated their 54th wedding anniversary and were looking forward to many more when the diagnosis of pancreatic cancer turned their world upside down. Gary never complained and faced adversity as he always had – with determination and spirit. He leaves a whole community of friends and a very loving family and he will be missed more than he ever knew.

The family suggests memorial gifts be made to Shoshone Pet Rescue or to Greenwood Cemetery.

Bruning Funeral Home, Colfax, is in charge of the arrangements. Online guest book is at www.bruningfuneralhome.com. 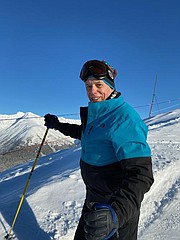