Pat attended early schooling in Wisconsin. The family moved to Mullan in December 1964; so Pat attended and graduated from Mullan High School in 1966.

Pat served in the U.S. Army during the Vietnam era.

Pat served as a miner for 45 years; he had worked at various mines/mining companies in the Silver Valley including ASARCO, Hecla and the Sunshine. During mine strikes, Pat served as a tramp miner to help support his family.

Pat loved the outdoors — fishing, hunting and camping; he also loved good food. He was a wonderful husband, father and grandfather to his children and grandchildren, and a special brother. Pat was very loved and had many friends.

Pat is survived by his wife, Linda Auger of the family home in Mullan; six children, Shawn (Katrina) Auger of Spirit Lake, Idaho, Lynsey Lotty of Connecticut, Randy (Tasha) Auger of Haugen, Mont., Tara (Damon) Martinez of Nevada, Jeanette (Frank) Hiatt of Wallace, Idaho, and Andrea Auger (Tanner Figueroa) of Kingston, Idaho; nine grandchildren and one great-grandchild; one brother, and two sisters, Nancy (Mike) Garitone of Coeur d’Alene, Rex (Debbie) Auger of Mullan and Julie (Bill) Erickson, also of Mullan; and his mother-in-law, Patricia “Grandma” Rishsew of Osburn, Idaho. He is also survived by numerous nieces and nephews. Pat was preceded in death by his parents.

A celebration of Pat’s life will be held and announced at a later date.

The family suggests memorials may be made to the Mullan Fire Department, P.O. Box 422 Mullan, ID 83846.

Shoshone Funeral Services & Crematory, Kellogg, Idaho, is entrusted with services. You may share your memories of Pat and sign his guest book at www.shoshonefuneralservice.com. 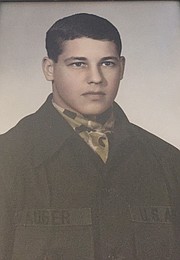