Taking it all in stride

It turns out that mayors cannot only be the political leaders of our communities, but also leaders in health as well.

Thanks to the recent Blue Cross of Idaho Foundation for Health Mayor’s Walking Challenge that wrapped up earlier this month, the nonprofit group handed out $65,500 to various communities across the state — a good chunk of which went to the Panhandle.

BCIFH Communications Specialist Nick Jezierny explained in an interview on the North Idaho Now Podcast that North Idaho was the top represented area in the state when it came to participating mayors.

“In Kootenai County alone, we had eight mayors — that was the largest of any county in the state.”

Now in its fourth year as a statewide initiative, the BCIFH Walking Challenge asks mayors to average a certain number of steps everyday in the month of October in order to receive a monetary donation, which can then be put into their community as the participating mayor sees fit.

“We would love to get 100% of the mayors because…that would be about $200,000 if they all walked 10,000 steps a day,” Jezierny said. “We are willing to do that because we know that mayors are the key part to community health. They are involved in so many things.”

“It’s really an opportunity for them to make some money for the community, to set a good example to people in their community, and then do something really good for their own health,” Jezierny said.

Among the North Idaho participants, Coeur d’Alene Mayor Steve Widmyer came out on top with 576,698 steps. Ponderay Mayor Steve Geiger came in second with 492,938 and then Linda Guthmiller with the city of Smelterville came in third with 468,268.

As someone who tries to get steps in regularly, even outside from the challenge month, Widmyer has appreciated this opportunity.

“With the Blue Cross walking challenge, it’s a good way to get in my steps and also earn money for charity!” he said.

In his first year, he recorded 1.1 million steps and while he wasn’t able to hit that mark this year, he still came out on top among the five northern counties. This was Widmyer’s third and final year participating in the challenge, as he will be retiring at the end of his current term.

Mayors have their choice on how they track their steps. In the early years, BCIFH sent participating mayors a Fitbit, but due to rising costs and the development of step counting applications on phones, most mayors now use their own devices. Through a platform that BCIFH leases through another company, the participating mayors can not only see their own step counts, but also compare their numbers to others across the state.

Jezierny points out that one of the best parts of this program is that there are very little commitments and there is no one way to meet the step goals. Whether they are already doing it for themselves or having to make a concerted effort — a step is a step toward the goal.

“One of the neat things about this is that there are some mayors that get 10,000 steps without trying, it’s part of their routine,” he explained. “What’s impactful for us is when we find a mayor who doesn’t (already have it in their routine) and they put forth the effort.”

In an interview with the Bonner County Daily Bee, Mayor Geiger attributed his finish to setting goals throughout the day.

“I learned to read the paper while walking around my shop,” Geiger said. “I made a sort of walking track in the shop.”

In Shoshone County, Wallace Mayor Lynn Mogensen works as a USPS mail carrier and knocks out many of her deliveries on foot. Her daily routine contributed heavily to her final step count of 418,332.

When it comes to what the mayors do with the money they receive from BCIFH, Jezierny said that the mayors generally donate the money to their local school district, but they also have been known to contribute to local projects as well. BCIFH is happy with the money going to schools because while the walking challenge isn’t a childhood obesity initiative, the money can be used for the noble cause of getting kids more active.

That was Widmyer’s thinking when he donated the $1,000 he earned to the Boys and Girls Club of Coeur d’Alene. Geiger also had that same thought process, as he donated his money to Ponderay’s only school, Sandpoint Christian School.

In Wallace, Mogensen said that she’s been saving up the challenge money for a special project also tailored toward youth activity.

“One of my pet peeves is that Wallace only has one basketball hoop, so that's what I have been saving it for, to put in some more hoops!”

The BCIFH Mayor’s Walking Challenge began in 2014 as a Boise area program, but due to its massive success, the decision to take it statewide was made in 2018.

Jezierny explains that since they were founded in 2001, BCIFH’s mission has been to give back to Idaho and really make the state a healthier place.

“When the BCIFH partners with organizations and gives money, we are looking for transformational change. We aren’t looking to put a Band-Aid on a problem. We’re looking to really drill down to that root cause of the issue and make changes that will last for generations.”

Looking forward to next year, Jezierny invites all mayors to participate next October.

This year’s overall step leader was Lewiston Mayor Michael Collins with more than 700,000 steps. Collins is a tri-athlete and a coach at the Lewis-Clark State College. 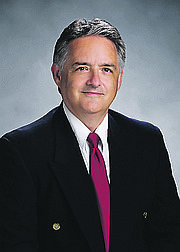