KELLOGG — It took a little longer than expected, but some serious remodels are now completed at Kellogg High School’s Andrews Gymnasium.

It was announced a few months ago that the school was looking to upgrade the historic gym, which included replacing the 50-plus-year old aluminum bleachers and adding a permanent concession stand.

The work was completed last week and the first look at the updated facilities took place during a KHS volleyball game, where the reactions were incredibly positive.

Unlike the previous bleachers, which over the last few years could no longer open without the help of multiple people, had burnt-out motors, as well as broken sections of the benches themselves and other serious electrical issues. The new bleachers correct all of those problems.

One of the biggest issues that the former setup had was that it was not exactly compliant with the American Disabilities Act (ADA), which meant anyone with any sort of disability may have difficulty using them, including a lack of handrails and nowhere for a wheelchair to be safely parked.

The new bleachers are fully ADA compliant, complete with handrails and a cool feature that allows for the bottom row of each section of the bleachers to be retracted into itself and allow a space for a wheelchair to be parked.

While it may come as a shock, the new bleachers are very much Kellogg purple, which has lended something extra to Andrews Gymnasium for those who have been inside it since the gym reopened.

“I like them, I think the construction company did a good job, including the quality of the work and the efficiency,” KHS Principal Curt-Randall Bayer said. “I like the purple, I think it really brightens up the joint. We’re ADA compliant, we have the handrails, I’m happy with how it turned out.”

While the cost associated with such a project may be one that residents balk at, clocking in at approximately $200,000, the cost is a far cry from what the district could potentially be liable for if the old ones caused any sort of injury while they were being used.

However the district did receive some donations for the project.

During the summer work began on building the concession stand, which sits adjacent to the western entrance to the gym, where an office had previously existed.

A section of trophy cases was relocated, and the wall was opened up to allow a section of counter space, which will open up the hallway for future projects.

“We want to take all of our trophies from over the years and organize them and put them on display somehow,” KHS Athletic Director Heather Goodner said. “We are thinking of some sort of Wildcat Hall of Fame that people can walk through, but we are still in the early planning for that.”

Goodner also wanted to extend thanks to everyone who helped with the projects, including those who donated to them, the Kellogg School District Maintenance Crew, and NorCon.

“There were some people who were working 12-13 hour days to make sure that we got this done in time for the first home volleyball game,” Goodner said. 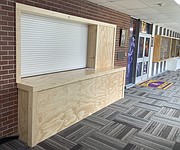