Members of the Kootenai County Genealogical Society stand solemnly in the rain at the Grand Army Republic Murray Cemetery in Shoshone County. Society members heard the stories of some of those buried there, many local historical figures of the Gold Rush era.
COURTESY/Nancy Beyer

A sign detailing the history of GAR Murray Cemetery is posted near the graveyard.

The grave of Molly B'Damn is pictured here at GAR Murray Cemetery in Shoshone County.

MURRAY — It has been said, “You know you’re a genealogist if the highlight of your last trip was a cemetery visit.”

Members of the Kootenai County Genealogical Society lived that out June 11 with a trip to the Grand Army Republic Murray Cemetery. This was the first outing for the group since COVID struck, and they weren’t going to let rain stop them.

The GAR Murray Cemetery, on Kings Pass Road near Murray, is a small cemetery with a lot of character thanks to years of restoration work by Larry and Sandy Hammer. After moving to Murray, the Hammers felt drawn to the unkempt cemetery and set to work.

They straightened and cleaned markers and spent countless hours researching old records while doing their best to identify and mark the locations of over 200 previously unmarked graves.

One of the most notable figures buried in the Murray Cemetery is Maggie Hall who is better known as Molly B’Damn.

Born in Ireland in 1853, Hall sailed to America in 1873. Soon after arriving in New York, Hall met and secretly married a wealthy man named Burdan who thought the name Molly better suited her.

Once the marriage was discovered, Burdan’s father cut off his son’s monthly allowance leaving the couple in dire straits. At the urging of her husband, Hall turned to prostitution.

After her marriage failed, Hall continued in the trade in various locations, eventually following others headed to the Coeur d’Alene Mountains in search of gold.

She set up a brothel in Murray.

Whether the name Molly B’Damn came from someone's mispronunciation of her name or from her colorful language, it stuck with Hall until her death in 1888 from tuberculosis.

One of the more touching grave discoveries shared by the Hammers was that of Ethel Lee Fuller, a 2-year-old who died in 1887.

Sandy Hammer had placed a marker where she thought the grave might be based on cemetery records. In 2020, Larry unearthed a nearby flat grave marker with no identification. He continued searching and found a toe stone with “E.L.F.” confirming it was the grave of Fuller. Sandy’s marker had been only a few feet away.

The Hammers led the genealogical society members to the gravestones of prominent figures from the local area, sharing their stories, and also pointed out the final resting place of Hollywood stuntman Taylor E. Duncan.

Of particular interest to the Kootenai County genealogists was the grave of Charles “Rod” Burnell, who was a longtime active member of the genealogical society. His wife, Alice, is still a member. A plaque in the genealogy section of the Hayden Library thanks the Burnells for their service to the society.

The Hammers have recently moved out of the area and are searching for someone to take over caring for the cemetery. The hard work has been done, but the cemetery will fall into decline without regular maintenance.

The Kootenai County Genealogical Society offers free genealogy help at the Hayden Library on Wednesdays from 1-4 p.m. Society meetings are held the third Thursday of the month at 6:30 p.m. at the Hayden Library, except for July/August and December/January. Visitors are welcome. 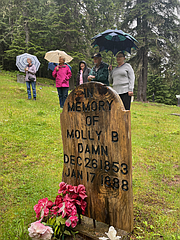 The grave of Molly B'Damn is pictured here at GAR Murray Cemetery in Shoshone County.

A sign detailing the history of GAR Murray Cemetery is posted near the graveyard.