KELLOGG — If you drive around the Silver Valley as much as this reporter does, you’ve probably noticed many of the new hand-painted signs popping up all over.

The artist responsible for these signs, Denny Wuesthoff, moved his business a few months back from Medical Lake to Kellogg and has been so busy with projects from local business owners that he has barely had a break to set up his storefront.

“It’s really been successful from word of mouth. Everyone in this town has been incredible. Welcoming me in, as though I have lived here for years, instead of months,” Wuesthoff said in an interview with the News-Press.

You can see the artist’s work all over the Valley, as he has completed work for bars, restaurants, and stores. He has also updated the paint job and completed murals at Kellogg High School.

“I’ve been working with a lot of purple and gold lately,” he said with a laugh.

The sky is the limit for Wuesthoff, as his work ranges from more minor hand-painted home decor signs to large-scale signs, while also finding the time to scale about 90 feet in the air, painting a logo on a tank for Millworx, a company in Post Falls.

“That one was tough, even though the tank is gridded. I had to look at it from the ground to get the right perspective and then go 90 feet up in the air and start painting.”

Wuesthoffs main inspiration for his artwork is the American artist and pinstriper Ken Howard, better known as Von Dutch. Before the 1950s, pinstriping was applied by following the edges of the car’s bodywork. Then Von Dutch took it a step beyond those accents, added more flourish in the corners of the vehicles, and developed his signature style.

You can see the inspiration while viewing Wuesthoff’s work, but he also has a way of making his pieces unique, taking Von Dutch’s style and putting his flair into it.

“I eventually want to set up my storefront like the famous Macy’s window displays. The theme would follow the seasons, and I could have a mannequin sporting a Halloween costume in October with drawings of Jack-o-Lanterns, and then a skier and some snowman for winter.”

Wuesthoff plans to open his storefront in the next couple of months, located at 311 Main Street in Kellogg. But for now, you can contact the artist at 509-863-2176. 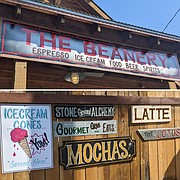