The Kellogg High School JROTC presents the colors at the Veterans Day ceremony in Kellogg on Wednesday.
Photo by CHANSE WATSON

KELLOGG — Wednesday may have been a cold day, but that didn’t stop people around the Silver Valley from honoring our local veterans on Veterans Day. Whether it was through memorial services, assemblies or breaking bread together — there were several opportunities for folks to get out and celebrate these special people.

A lot of that had to do with the efforts of Shoshone VFW Post 1675 Commander Chris Marker, who organized the annual memorial service at the Silver Valley Veteran’s Memorial in the Kellogg City Park, as well as a special chili feed at the VFW Hall in Osburn.

The memorial service, highlighted as always by the ceremonial firing of the retired howitzer cannon, was short and sweet as Pastor Gene Jacobs (a veteran himself) gave a brief invocation prior to the crowd pleasing boom (even if it was a bit delayed).

After that, everyone was invited to Osburn for the chili feed, which was well attended and left more than 50 people with full bellies.

“I thought everything went really,” Marker said. “We had a very good turnout despite the weather being so cold and with all of the COVID stuff. We are so thankful for everyone who came out — including the Kellogg High School Marine Corps JROTC, we always love seeing them.”

Marker was not to be denied when it came to planning the Veterans Day events. Getting a lot of motivation from the current climate of the world we live in, he believed that it was important that the show went on.

“This year more than anything it was important to get out and celebrate our veterans,” Marker said. “We didn’t get to celebrate Memorial Day, we didn’t really get the Fourth of July. These days are important. Less than one percent of American’s serve their country, it’s important to get our vets together no matter what the level of service, and recognize and celebrate those who have served our country.”

Marker would like to thank Carol Young and the Kellogg Elks for their support and donations, as well as Kip McGillivray for the new sign that was donated at the VFW Hall. 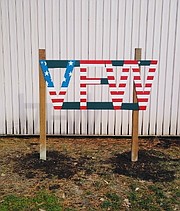