Lookout for that boulder!

Part of the 2,000 pound boulder sits next to the second semi-truck Wednesday night.
Photo courtesy of SHOSHONE COUNTY FIRE DISTRICT NO. 1

Part of the large boulder on the side of Interstate 90 the day after the collision.

The trouble area on Interstate 90 near milepost 67 that has caused so much trouble. Falling rocks pick up speed when they fall down this hillside trench and can be launched onto the roadway.

MULLAN — A particular troublesome hillside known for rock slides has once again been responsible for an incident on Interstate 90 near Lookout Pass.

On Wednesday night, two semi-trucks were traveling in the left eastbound lane on I-90 around 7:15 p.m. when the lead truck encountered a roughly 2,000-pound boulder near milepost 67 that had rolled down the southern hillside and onto the roadway.

This lead semi was unable to avoid the obstacle and ended up running it over.

Shoshone County Fire District No. 1 Lt. Victor Malsom explains that upon contact, the boulder was split in half. One half of this rock made its way up under the hood of the first semi and lodged itself near the front axle, engine and radiator — rendering it “dead.”

The second half of the boulder shot out from behind the first semi and subsequently struck the following second semi. This second strike caused front-end damage as well, but no serious injuries resulted from either contact.

Personnel with the Shoshone County Sheriff's Office, Fire District No. 1 and Mullan QRU were first on scene around 7:30 p.m. and found that the disabled semis were blocking a single lane of eastbound traffic. Troopers with Idaho State Police and work crews with the Idaho Transportation Department arrived not long after to investigate the situation and clear the roadway.

After processing the three individuals involved, it was determined that a passenger in one of the trucks had an outstanding warrant from Kootenai County and was taken into custody.

Upon a closer look at the scene, Lt. Malson states that the southern guard rail had the top “cage” missing in a section, leading them to believe that the boulder jumped the barrier.

"There was also damage to the outside jersey barrier along the mountainside, indicating that it slowed the boulder but didn’t stop it," he added.

The damage to semis also showed that they were driving properly for conditions, but where the accident occurred was on a turn which limited reaction times.

ITD Public Information Officer Megan Sausser said that this particular hillside has been an issue for some time now.

"This particular hillside was responsible for a boulder reaching the interstate in June as well," she said.

Originally, ITD had plans to solve this problem area in 2024. With the recent string of incidents though, it's possible that a solution may come sooner. Sausser explains that a long-term fix would involve constructing a large wall that would shield the road from falling debris. In the short term, ITD may employ a strategy they used near Riggins, Idaho, this year when a rockslide blocked the highway. This would involve using train boxcars as a barrier to stop the loose debris. 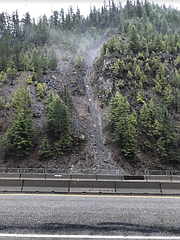 The trouble area on Interstate 90 near milepost 67 that has caused so much trouble. Falling rocks pick up speed when they fall down this hillside trench and can be launched onto the roadway.

Part of the large boulder on the side of Interstate 90 the day after the collision.