The individual that the Shoshone County Sheriff's Office would like information on regarding a possible arson attempt at the Brooks Hotel Tuesday morning.
Photo courtesy of BROOKS HOTEL

WALLACE — The Shoshone County Sheriff’s Office is looking for any information concerning a potential arsonist at the Brooks Hotel in Wallace.

According to Brooks management, the suspicious circumstances occurred during the early hours of Tuesday morning between 2 and 3 a.m. when a clean-shaven, caucasian male in his 30s/40s wearing a red Jordan hat and black jacket wandered the main hallways in the hotel before making his way into the basement.

Indications of arson found at the scene include a gas line from a generator located in the basement being cut — allowing fuel to spill out onto the basement floor — as well as a poured line of gas, several gasoline soaked towels, and multiple unused matchbooks found on the ground.

There was no evidence to suggest that a fire was actually ignited, but due to the amount of accelerant found at the scene, even the spark of a pilot light or the flip of a light switch could have been enough.

Along with the baseball cap and jacket, the man was wearing jeans and a pair of heavy winter boots.

At the time of the incident, there was just under 20 people staying in the hotel.

If you have any information that may help identify who this person is, please call the SCSO at 208-556-1114. 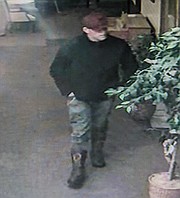