Devon Demery and Krista Hanan check out the assortment of live auction items that were available.

An assortment of custom bras made specifically for the Tata's Party.

Scottie Peters points to a bidder during the live auction on Saturday.

WALLACE — From a fast-talkin' auctioneer and light-up bras to wine and cupcakes, the 10th annual Tata's Party on Saturday provided attendees with laughs and smiles — all the while supporting a noble cause.

"It was hands down the best one yet!" Event organizer Aubrey Stovern said. "It was by far the most fun I have ever had at a Tata's Party and I have a lot of fun at these parties! It was a great time."

Hosted for the now second time in a row at the Wallace Elks, the proceeds of the event benefited two local cancer support groups — Shoshone Medical Center Foundation's "Valley Strong" and the Shoshone Cancer Support Corporation.

Between funds raised through a live auction, silent auction, rifle raffle and numerous other smaller activities, this year's event raised a whopping $15,000; blowing last year's $9,100 record out of the water.

Organizers of the Tata's Party debated for months over whether or not they should hold the event due to the COVID-19 pandemic, but with the cancellation of Valley Strong's golf tournament and the need the group has for funds, the green light was given.

Ashley Myles, SMC Foundation Director, explained that Valley Strong is a new concept by the Foundation to get the word out about SMC's "Screening Saturdays" that started last year.

"The Foundation started Valley Strong," Myles said. "It's basically a campaign … raising money for whatever cancer needs we come up with from women who come through our screenings."

At these screenings, the SMC Foundation covers the cost of the screenings if the patient doesn't have insurance.

The first screenings in May of 2020 had 10 patients that all were given clean bills of health. The second in June though had 14 women with four receiving callbacks.

"Once women started getting callbacks, we needed further resources," she said. "We needed to find a way to make sure that these women could follow through with what they needed next."

Funds that come from events like the Tata's Party can help Valley Strong cover the cost of a diagnostic monogram or another follow-up service that may or may not be offered at SMC.

Co-founder of the event, Vicki Harper, was the first to come up with the idea and the tradition just stuck.

"The bras just started out as something fun, something whimsical, something outside of the box that you would auction off," Stovern said.

Stovern made sure to shout out Scottie Peters for his work as auctioneer, who had the roughly 125-150 attendees busting up nearly every time an item came up for bid- especially the bras.

With all the money added up, Valley Strong recieved $12,000 from the Tata's Party and another $177 from the Mullan Volleyball Team, which raised the funds during its Dig-Pink Volleyball game on the same day in Kellogg.

The remaining Tata's Party money was donated to the event's traditional donor, the Shoshone County Cancer Support Group. Stovern explained that the Support Groups's need wasn't as extreme as previous years due to a loss of patients and their office being closed due to COVID-19.

"They felt that it would be irresponsible for us to fundraise and give all the money to them."

The support corporation is a 501(c)(3) that provides $25 vouchers (of various types, such as fuel and prescriptions) to Shoshone County residents battling cancer of all types.

With the most successful party yet in the books, Stovern has been overwhelmed with the amount of generosity she has seen and is already looking forward to next year.

"It's amazing that this community always comes together!" she said.

Scottie Peters points to a bidder during the live auction on Saturday.

An assortment of custom bras made specifically for the Tata's Party. 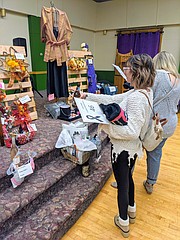 Devon Demery and Krista Hanan check out the assortment of live auction items that were available.