Radio Brewing Company caters to its community by providing a Mug Club for those who love to satiate their thirst with their specialty brewed beer. In the background, the Dr. Sixgun Pale Ale painting was done by the owner, Ashley Mehaffie and was one of the first beers brewed for the company.

The brewery is located next to the taproom of Radio Brewing Company and is full with large brewing barrels.

Rancho Viejo, the Mexican restaurant that was on Main street in Kellogg.

KELLOGG — As someone who has lived in Kellogg for most of my life, I have borne witness to the growth, change and adaptability of the small, valley town.

Businesses have come and gone, and sometimes the only evidence that any of these previous places even existed are photographs and memories.

Radio Brewing is one of these newer businesses, but one that has already shown its staying power in just a few years.

Occupying a space that has plenty of history itself, the building that houses the taproom and restaurant of Radio Brewing has been the home to a pretty diverse array of restaurants serving dishes from all around the globe.

Most recently, the building housed Irish pub-themed Fogarty’s, and prior to that Rancho Viejo — an authentic Mexican cuisine restaurant. In the early '90s, the Pizza Factory tossed its pizzas in the Main Street building, before moving its business to Wallace.

My relationship with Radio Brewing changed from customer to employee last summer, as I took a job as a server, giving me the opportunity to learn more about what makes the eatery and bar so exceptional.

Offering a substantial menu of in-house brewed beer, as well as other alcoholic offerings, Radio also features an extensive selection of eats — ranging from the more traditional pub food all of the way to more artisan items for folks with a more expanded palate.

Most — if not all — of the decor around the building was selected by Ashley, who started the company around five years ago with her husband Fred Mehaffie.

The couple both have decades of experience working in the brewery industry, and opened the first — and so far only — brewery in Kellogg naming it radio after their initials. AM and FM.

Not originally from Idaho, the couple understands the importance of using the culture, as they have lived and brewed in smaller towns throughout their life. Using names like “Idaho Sexy Huckleberry Wheat” and “Wildcat Wheat” to tie their beers to Idaho, more specifically Kellogg, as the mascot for the school is the Kellogg Wildcats.

As if brewing and distributing the beer, expanding the restaurant, creating the menu, and looking over the staff of the restaurant isn’t enough, Ashley is also the artist for the 1940s and '50s pin-up artwork on the cans.

The first thing I liked about Radio when I first walked into it around five years ago was the bar. A gorgeous plane of dark wood, that I would later be told, was incredibly special to the owner, Ashley. One of the first things I was told by a fellow server while she trained me, was that it was one of the most important parts of the restaurant. The bar, and the preserved jumbo lobster in a clear shadow box.

The jumbo lobster was caught by Ashley’s father when she was around 5 years old. A photograph from around that time shows Ashley, sitting on the floor with the jumbo lobster with a smile. When their family ended up eating the lobster, Ashley describes it like eating a steak, because of the size. I was once advised that if the building burnt down, to not worry about any of the more expensive, antique items, but to save the jumbo lobster.

Ashley and her husband recently purchased the former Kellogg City Hall, Library, and Firehall building that sit next door. The couple also owns the house on the corner of Emerson Lane in Kellogg, which will eventually be a wine and tapas bar.

The old Firehall has been the location for a plethora of exciting events over the past year. Retirement parties, fundraisers, after-parties with live music have all been held in the massive building.

Ashley wants to eventually expand the brewery into the Firehall, as its current location is overgrown with large beer barrels with no room for any expansion. With an unstable economy and supply costs increasing rapidly, the upgrade is on hold yet the space is valuable.

“There isn’t another space like this for events in Kellogg,” Ashley said.

She also eventually plans on revamping the upstairs rooms in the firehall for employee housing, or a hostel for short-term visitors.

“There are a lot of AirBnBs, or long-term rentals, but there isn’t a place for recreational tourists to stay for a weekend at a good price,” she said.

One of the coolest parts, in my opinion, of acquiring the old Kellogg City Hall is the jail.

“I eventually want to turn the space into a speakeasy. It’s the perfect location for it.”

The concept would be similar to speakeasies in the Roaring 20s with a secret code word to allow you into the establishment, for a fun evening of revelry in a more discrete location.

Fred and Ashley have established themselves as community members in the Silver Valley, holding block parties with live bands, an exciting soap box derby and sponsoring local events.

“I’m really happy that the community has been so supportive of Radio,” she said.

Rancho Viejo, the Mexican restaurant that was on Main street in Kellogg.

The brewery is located next to the taproom of Radio Brewing Company and is full with large brewing barrels. 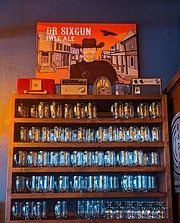 Radio Brewing Company caters to its community by providing a Mug Club for those who love to satiate their thirst with their specialty brewed beer. In the background, the Dr. Sixgun Pale Ale painting was done by the owner, Ashley Mehaffie and was one of the first beers brewed for the company.