The first of two drills that will be utilized during the year and a half-long exploration program at the Sunshine Mine (and associated properties). This particular drill is currently installed at the Daylight Switch inside the Con-Sil tunnel and has already been pulling out numerous core samples for the Sunshine team to analyze.
Photo by CHANSE WATSON

Boxes of drilling cores are laid out for inspection at the Sunshine Mine.

The LM110 drill in the Con-Sil Tunnel's Daylight Switch bores into a wall of the tunnel.

Sunshine Mine General Foreman Justin Wilbur operates a mine cart toward the exit of the Con-Sil Tunnel.

BIG CREEK — For the last decade, operations at the historic Sunshine Mine in Big Creek have been limited. A skeleton crew of approximately 15 employees has largely been responsible for slowly updating the mine since a 2012 rehabilitation and drilling project was terminated.

With the August 2022 approval of a substantial exploration program by the mine’s owners, Sunshine Silver Mining and Refining, this calmer time could be a thing of the past.

Mine General Manager Tom Henderson explains this nearly two-year long operation has already begun with the arrival of personnel and equipment from Boart Longyear Drilling, based in Salt Lake City.

The main objectives of this program are to expand known mineral resources and discover new veins in not just the Sunshine Mine — but adjacent owned properties as well. These other properties include the Sterling Tunnel, Silver Summit, ConSil and Polaris.

“We’re really getting excited to be doing exploration drilling in areas that are either under-explored or completely unexplored,” Henderson said. “Geologically, there’s reason to believe that there is undiscovered mineralization out there.”

One of the two drills that are planned to be utilized for the operation has already arrived on-site and has been responsible for providing several thousand feet of rock cores.

Currently drilling near the Daylight Switch inside the ConSill Tunnel near Osburn, this LM110 drill (with a second LM90 drill expected to arrive in October) has the capability of boring holes from 800 to 3,000 feet deep into solid rock.

The rock cores that come from this and future drilling efforts are then packaged up and sent to the Sunshine Mine complex for logging and analysis by geologists- such as Geology Manager Greg Nickel.

Nickel explains that when a box comes in, each containing 10 feet of rock core, they are laid out sequentially and inspected with a variety of factors in mind.

While the standard money minerals of silver, copper and zinc haven’t appeared yet in the early rocks collected, other interesting geologic minerals such as pyrite and garnets can be seen in numerous samples.

Nickel is not concerned with the lack of the silver, copper and zinc in these early cores, as this first stage of drilling at the Daylight Switch will require drilling through unknown ground for new discoveries.

Done in conjunction with the exploration component of the operation, the data collected from the ongoing drilling operations will be combined with previous historical records to create a 3D geological model of all the veins at the Sunshine and adjacent properties.

The previous information that the new drilling information will be added to includes roughly 130 years of documentation.

“There’s over 100,000 data points of discrete items that have been identified, sampled and described, but they are on hard copy/old maps from the '20s and '30s.” Henderson said. “It’s a project. We’re pouring all of that into a single 3D model.”

This model will be used for future technical studies to upgrade the mine and mill for commercial production, in addition to developing a mine plan to restart mining operations with a minimum of 10 years of mine life.

With so many years in “care and maintenance mode,” Henderson and the rest of the Sunshine team are excited to be making the kind of moves that restarts a facility such as this back into production.

“The team here at the Sunshine were ‘on it’ when we first announced the approval of the project,” he said. “That drill showed up, everybody had their roles to play, and within three days, we were churning and burning underground.”

With the addition of 15 Boart Longyear personnel, the Sunshine Exploration program is slated to run from August 2022 to March of 2024. Drills will run seven days a week with crews pulling double shifts. 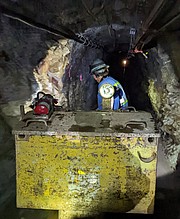 Sunshine Mine General Foreman Justin Wilbur operates a mine cart toward the exit of the Con-Sil Tunnel.

The LM110 drill in the Con-Sil Tunnel's Daylight Switch bores into a wall of the tunnel. 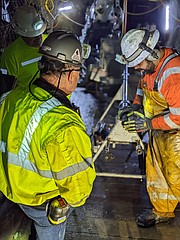 Boxes of drilling cores are laid out for inspection at the Sunshine Mine.